Curcumin, the major component of interest in the spice turmeric, has been used for thousands of years for its medicinal properties as well as for culinary purposes. Turmeric is a rhizomatous herbaceous plant of the ginger family, known as Curcuma Longa. It is used around the world in various ways ranging from capsules, powder, in food, condiments, teas, as a colouring agent, in cosmetics, energy drinks and much more.

It is used for its anti-oxidant and anti-inflammatory properties and thus has been studied as an aid in a wide variety of conditions where inflammation and oxidative stress are present. These include osteoarthritis, cognitive decline, metabolic syndrome, cancer, asthma, depression, raised triglyceride levels and degenerative eye conditions. It may also help in the management of exercise-induced inflammation and muscle soreness, thus enhancing recovery and performance in athletes. In addition, a relatively low dose may provide health benefits for people without any medical conditions. Most of its benefits are attributed to its antioxidant and anti-inflammatory effects.

Some scientists believe the jury is still out on the benefits of curcumin, and point to its ability to interfere in a number of laboratory tests and the lack of definitive hard evidence despite hundreds of trials and studies. It’s use in auyrvedic medicine for thousands of years and across so many cultures, convince others that this supplement should not be dismissed too readily.

Curcumin on its own is absorbed poorly by the body and is metabolised (breaks down) quickly. Taken on its own, it is unlikely to provide much in the way of health benefits. The addition of a small amount of piperine however, which is a substance found in black pepper extract, had been shown to improve the availability of curcumin to the body by 2000%. Taking curcumin and black pepper together is a simple way to markedly increase the absorption of curcumin.

The usual dose of curcumin taken for medicinal purposes is between 500mg to 2000mg daily, divided as two 500mg capsules twice daily. The higher dose of 2000mg daily is recommended for analgesic effect in osteoarthritis. 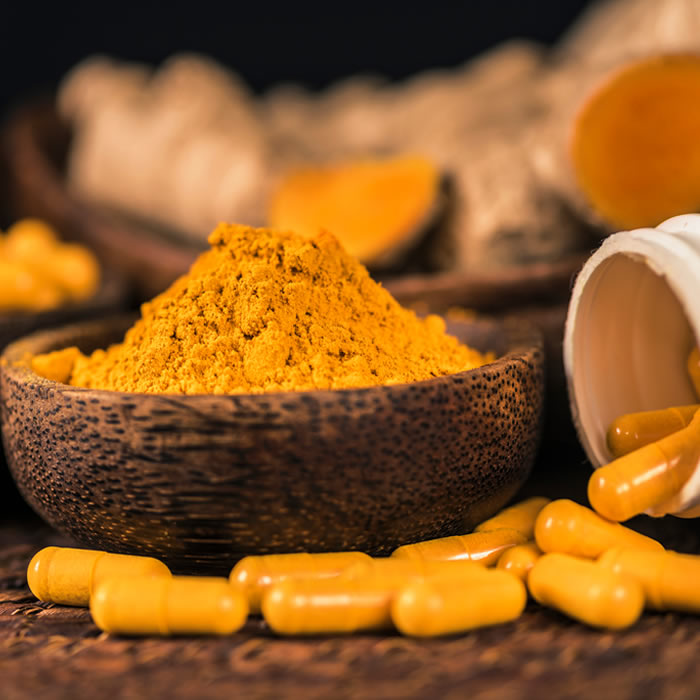 Curcumin is considered to be very safe with a long, established safety record. A small number of people have experienced a rash, diarrhoea, yellow stools, nausea or headache with side effects more common at very high doses for long periods of time. Rarely, there may be hypersensitivity to curcumin. Tell your doctor you are taking curcumin, if you must have any surgery.

Curcumin concentrated in capsule formis best avoided during pregnancy, however the amounts consumed when used in cooking with turmeric are likely safe. Though not definitive, there may be a risk of early labour with high amounts and most experts agree it is best to avoid medicinal doses of curcumin while pregnant.

Curcumin is even being used for dogs and cats for a variety of conditions including arthritis, immune disorders, inflammatory bowel disease and cancer. The taste and smell might present dosing challenges however, and make sure to consult your vet regarding dosage.

We create tailored compounded medicine and deliver within Australia and Internationally

Thank you for submitting your prescription to us online.

One of our staff will be in touch with you (weekdays only) to confirm that your order is being processed .

Please note that we maybe in touch regarding the need for further information to process your order.

We create tailored compounded medicine and deliver within Australia and Internationally.

Thank you for submitting your prescription to us online

One of our staff will be in touch with you (weekdays only) to confirm that your order is being processed.

Please note that we maybe in touch regarding the need for further information to process your order.